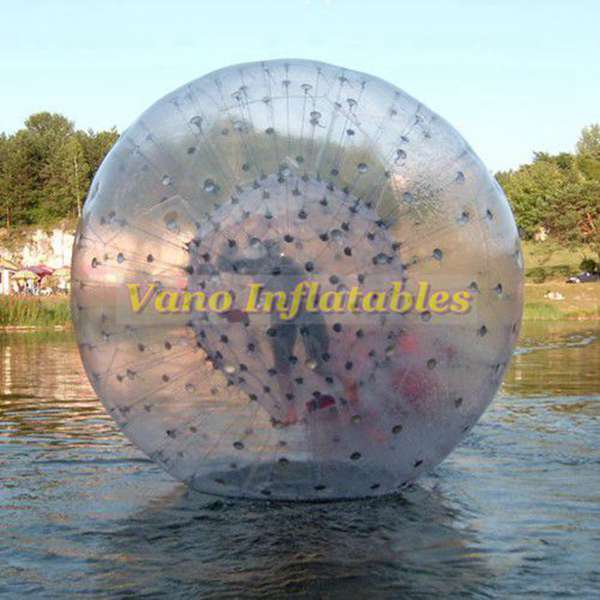 Posted On September 14, 2018 By Vano Inflatables

Inflatable Zorb Ball – To Have Fun in Sea Walking

As we know, people regularly use the inflatable zorb on grass or water for enjoyful leisure and laugh. However, one guy on the TV show moved forward with it to pass the sea in a zorb. What may be more thrilling than zorbing on the normal water of inflatable? Now going to cross the sea is an amazing choice. This was exactly what the United States presenter Brad Wilson tried to achieve.

As a matter of fact, Brad has been thinking about zorbing across sea since late 2015. At the very begining, it is just a lofty aim to collect funds for sporting charity and aids. He came up with the idea of going over the sea in a giant inflatable sphere, as similar as hamster ball for humans. Brad would walk and run inside the inflatable zorbing ball on the water level of ocean to roll it forward. He need to finish over 20 miles in the ocean in around 12 hours effort.

Actually, Brad has been in the training for a while so that he is competent to the challenge. He never deal with this tough job of zorbing through sea in his whole life. Brad had done a lot of sports exercise of running and jumping. He had finished the two long distance race matches in Europe and USA. Everything was ready to go for him.

Therefore, he set up the equipment and voyage well in one day of late 2015. The dawn did not even come up before he put the inflatable zorb ball on the seashore. People should be aware of the difference of his zorb ball. In order to roll it a lot far than usual, the staff amended and upgraded the hamster zorb ball with paddles. Apparently, the regular zorbs are for amusement and leisure only under safe situation. Still, this special orb was reinforced for a big challenge. Next, Brad went to the near beach over there and prepared for a long journey more than 9 hours. Obviously, he needed to cope with the complicated situations in the ocean. But it didn’t seem everyhing was under control in the sea, such as irregular hot climate, ocean current, storm and more.

Unluckily, however, the risky waves began to go up after only one hour trip of water walking. The climate changed a lot suddenly and the terrible storm just came along. The hazard is everywhere, while there were so much waves roaring. Considering the safety, Brad and the group had to give up the unbelievable exploration. Frustratingly, they were only thirty percent completed to the total journey. And so, that was just a start of big adventure!

Benefit From Zorbing Attempt on Sea

The strong storm destroyed the trial of zorbing cross the ocean, one of the teamate admitted after a moment. Brad had done his utmost to overcome the crazy flow and weather with this giant inflatable zorb ball. Gladly, however, he contributed to the successful fund collecting event, though he had not made it for the attempt. Obviously, people got their hats off and expressed high applause to his adventure. That was something nobody even tried ever before. Well done! He benefits people with the courage and perseverance. A great experience and inspiration from his zorbing ball feat. More zorbing twitter.