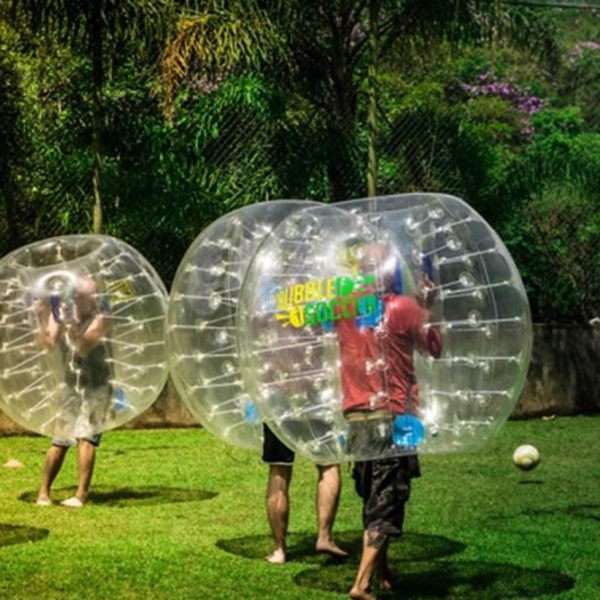 Where Can I Buy Bubble Football?

Where can i buy bubble football? Try some bubble balls at https://zorbingballz.com/bubble-soccer/bubble-football/. Actually, people can use them for battle game, and that is why they are known as battle ball or knocker ball. One guy just stand in the center waiting for others coming over from a side to the opposite. Just try to hit everyone down with knockerball when other players go cross the arena. The person goes to the middle of the venue after he gets hit down. The final survivor without being downed is going to win the battle. What a terrific battle balls game!

Two options for the clients, if they find the zorb football bubble sports fascinating and want to be a part of it. One hand, try to buy bubble football suits in a few units and enjoy it in the park or soccer pitch with the classmates or workmates. On the other hand, find out a venue in the town supplying or renting out the soccer bumper balls. In fact, these inflatable bubble suits are quite expensive per unit. However, different sellers offer various prices for the body zorbing ball. Usually, the discount is possible for bulk order on loopyball. When the customers would like to hold a two teams football game, they can purchase the bubbleballs in two colours. Red and blue in half colour are most popular. Besides, many people also prefer the coloured dots in red, yellow, green and blue etc.

There are lots of sellers on Amazon, Ebay and other online marketplace. However, not so many vendors are able to high quality body zorb balls, and Vano Inflatables Limited is one of the reliable businesses. Where can i buy bubble football? Welcome to inquire the prices, quality and availability here.

Two guys from North Europe invented the bubble football or body zorbing balls. In 2007, one television programme presented the new sport for the first time. But it did not drag much attention and was not that successful. Some businessmen in United Kingdom even doubted the prospect of football bubble. In the first few years, the popularity of bubble sports did not grow fast. Surprisingly, the zorbing football just hit the craze after 2010, sweeping the western countries. It became famous bubble soccer in USA, Canada and Australia, loopyball in Germany and body zorbing ball in Asia. European also call it bubble football or zorb football. Now, many places have seen the success of the bubble ball football. Some celebrities even started to try the innovation of soccer bumper ball in TV show.

Where Can I Buy Bubble Football?

Now, you have an answer for “where can i buy bubble football”? Zorb Soccer is another popular name for this sport in New Zealand. A lot more similar inflatable games and extreme adventure products are available, including human hamster ball and water walking ball.