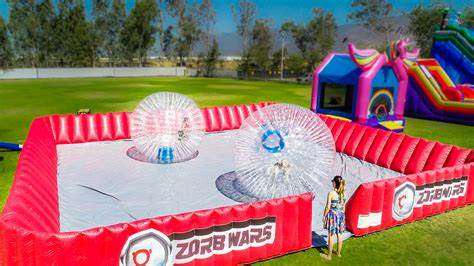 Posted On November 21, 2022 By Vano Inflatables

With zorb wars, you will be literally head over heels over the zorbs. Players enter the arena and climb into a zorb ball. When the attendant says go, the battle begins. Basically, anything goes as you’re under pressure to knock each other over, bounce each other down the arena. It’s hilarious to watch and even better to play. Players make a mad dash toward their opponent and try to roll them back, causing them to lose their footing in their own zorb ball. Can you wear them out? An exciting new take on the popular inflatable human hamster balls.

Bubble Football
2 teams take to the field in their body zorbs & enter into a game of football with no rules. Fouls are encouraged, as is taking out your opponents. You don’t have to have the football to be taken down!

Bubble Bulldog
Players run from one end of the arena to the other, aiming to avoid being knocked over by the Bulldog. Players downed join the bulldog in the centre until just one player remains.

Bubble Duel
Participants will take it in turns to run at each other. This event sees the biggest hits, and truly determines who has the power (and weight) behind them.

Bulldog Smash
As a team you have 3 minutes to get past your opponents & touch the back wall as many times as possible. If they knock you down, you must return to base & start again. Get a big score, then defend it!

Last Man Standing
The ‘Royal Rumble’ of the zorbing world. It’s all against all, and the last person standing is declared the winner. Any standing around will see our ‘Zorb Master’ push you to the floor as punishment.

Free-for-All
Where time allows, we will end the session with a no-rules free-for-all. Get those last big hits in & get your revenge against that one person that has targeted you all session.